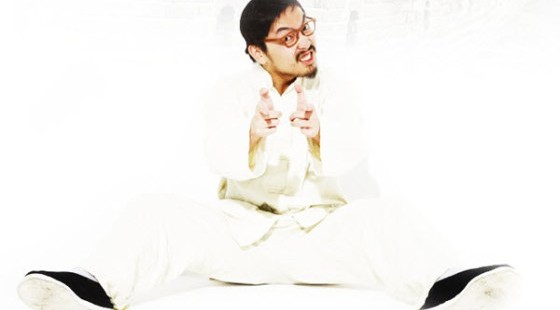 Daddy Chang is a Chinese Muslim Rapper. This is an interview that we conduced with Daddy Chang in 2013.

1) Can you please tell us something about your background?

I was born and raised in Taiwan, an island of United China refuged to the KMT party after the civil war ended. My grandfather was a soldier of the KMT and retreated to Taiwan with Chiang Kai Shek after they were defeated by Mao’s army and lost the territory of mainland to Mao. My mother’s family on the other hand was a Taiwan raised [and] born Taiwanese origin. My father would grew up to join the KMT as well. He was a navy Major before retiring and became a legal sub-marine parts dealer between Europe and Taiwan, but soon went to military prison after false charges of leaking classified documents because the Taiwan current president Lee wanted to bring down all the mainland origin KMT (be)cause he was aiming for Taiwan independence. [He] failed and my father was later released after two years with money paid to him and decided to move his family to Canada, and that is when I started a different life in a different country.

I moved there not knowing how to speak English nor the culture of North America only to find kids in school try to pick on you for been different. Many white kids were nice and good people but many were racist. I assume possibly from their elder generations or TV. I would get in fights everyday as well as make friends with white people and starting to learn of their culture. I learned most of my English from watching TV and radio and it was then [that] I began [to be] inspired by hip-hop where the culture’s main core was founded on fighting against oppression of any sorts and equality of human rights. And it was just something about Rap that spoke to me, like this is the way to state something, this was the way to give a speech like a true poet with flow and spirit. So I got together with people with the same hobby and interest and we’d begin to write our own rap songs and me and my boy would mess with programs that make original beats, and that’s when it started. [In] high school [I] was more listening to rappers albums and study[ing] the history of hiphop. I just felt in love with it.

I did not like school [be]cause I thought the major topics you needed to pass high school were nonsense. My philosophy was that God gave everybody a different gift and passion; and students shouldn’t have to pass the four main classes like math and such to get into whatever college they desired to get into. Students should automatically be given the choices to choose the main classes they want to learn. So I skipped school everyday to smoke weed with the rebel kids and would get in fights and trouble all the time. But I loved to hang[out] in the library [be]cause I could read whatever I wanted to learn. I was around all kinds of friends; Christians, Atheists, Buddhists, but never really knew a Muslim brother or sister until after college.

I used to love classes of all kinds of art, painting class, graphic design, acting, music, as well as PE. I joined the football team when I hit grade 11. It was not until grade 12 that I decided to actually study harder on the four major topics cause my folks wanted me to graduate high school badly. So I turned my report cards from F’s and D’s to straight A’s, maybe 1 or 2 B’s and the teachers couldn’t believe it. It only took two terms for me to surprise my teachers. I believe it was around grade 12 that 911 happened as well, and I was introduced to the name Islam for the second time, first was thru hiphop [be]cause [of] the black history and even rappers contained a lot of so called modern day Muslims. I found the footage of those so called Middle-Eastern Muslims on TV that they were showing to be nice looking people and did not believe that they committed 911 [be]cause the Muslims I heard about from hiphop was always the ones who got oppressed first before fighting back, but thought if so, then it was a little extreme anyways. I thought that Malcolm X wouldn’t have supported something like 911 so that atrocity probably wasn’t really what Islam teaches people to do. It was for the first time I wanted to read what Islam really teaches [be]cause I was already at the stage of: TV tells 90 percent nonsense while everybody else and many white kids were dissing Hindus and picking on them for [being] Muslims.

I read some of the teachings of Prophet Muhammad(Peace Be Upon Him) and re-confirmed my thoughts that the media was definitely 99 percent nonsense [be]cause all those teachings of Prophet(PBUH) was the most fair and reasonable person I have read out of all the other religious books. Don’t get me wrong, I love teachings of Buddhism and Christianity as well, my mother herself is a Buddhist and I love the teachings of Buddhism but I felt it just is too saintly for regular human beings to absorb, I felt like his teachings should be for Angels to read or something, but I thought the teachings of Muhammad (PBUH) and his quotes were both real and spiritual comparing it to humans’ condition and fits more for masses to practice and read. But I hadn’t reverted to Islam yet.

It was shortly after college, Vancouver Film School, I began to play with films and mess with youtube and was seeing how there are still more and more people demonizing Muslims. I wanted to fight for Muslims because I thought Muslims were good people but victims, and I always love to stand up for victims and hated the way the West (generally speaking) looks down upon other races and religious folks, so I began studying Islam. At first I thought the Holy Quran just feels like reading the Bible, but as I gotten to more and more of it, it felt more like something more suitable to teach people [be]cause Buddhism teachings were cool to me but was just too deep for the masses of human minds to understand. Then I got to the quotes on miracles and how it says the moon and the sun spins in orbits and how life came from water and all that from 1400 years ago, and the way some stuff is said was like. It was talking to you, there was just something about it for me was like, Poems from above from the Heavens or something, but with messages to people, kind of like rappers delivering messages to kids like it’s bound to happen for the better but it was no regular poem.

I hadn’t taken my Shahada yet then, I began debating for Islam and Muslims on youtube, I began to share some of Hadith quotes on YouTube in my videos as well, but I also shared other kind of stuff in my channel, like my rap songs we used to perform at flea markets we’d record it down and put on YouTube with original beats, and began to pause on reading the Quran then and spent more time on films and music again on YouTube, and around 2007 or something, they shut down my account. It was then I began to piece myself again and reading the Holy Quran once again. That’s when it really began to hit me, like how certain things just happen at strange times for a reason, like I was meant to love hiphop and Allah brought me back to Islam too [be]cause of what I stood for, what Hiphop stood for, and what me and hiphop both stood for, as well as my mothers’ Buddhism teachings all combined together; what Islam stood for for me personally. That of course in believing the Holy Quran was a miracle, and that’s when I took my Shahada with two online Muslim friends as my witness and decided to not only fight for justice through music anymore, but also fight to influence myself better with Islam Masha’Allah then influence people with both righteous messages as well as quotes I learned from Allah in Islam.

2) How did you start rapping?

So to say when I really began rapping?  To mess with rhymes and spit flows I began of a young age but because rap [is] meant to speak, to give a speech,to truly say I began to speak to people with the right intention, it was really after i took my Shahada, Alhamduillah, that I truly began to speak with care and hunger for justice for my messages. So I wrote a few important English songs and got my friends to upload on YouTube again since my account got banned and began moving to Shanghai to start my career then and began to speak from there.

3) What kind of themes inform your work?

Life informs my work, whenever Allah needs whatever messages [is] shared,. It will just happen at the right time.

4) What has been the reaction to your work? How has your work been received by the Chinese community? The Muslim community received your work?

My work is received by the Chinese hiphop community as mostly political rap and one that has the [audacity] to touch on sensitive topics here [be]cause I criticize the communist government all the time and touch on topics that many don’t touch over here cause they know they [are] going [to] get censored anyways or invited by officials to drink tea wit them and warn us to shut up kindly. But as I grew more popular here, they censor less and less of my work cause they know that the more they censor, the more people will criticize and prove themselves right. So freedom of speech here grows freer and freer everyday not only from our community of hiphop but on shows, radios, and blogs of other artists and writers. People here in China fought and improved freedom of speech thru internet and blogs which is heavily tied to how we operate hiphop in China nowadays as well. It’s the way indie artists work today and we provide a platform for more artists to do that as well. A lot of hiphop kids here assume they haven’t invited me to drink tea is probably [be]cause of my Republic of China(Taiwan) passport,no mainland; mainland is PRC; citizen as well as me [being a] Canadian citizen. Means I’m not really a Mainlander citizen so they can’t arrest me cause I am basically a foreigner Chinese, haha So yeah, the guy that raps politics to some, raps truth to some, and a lunatic to some. But definatly one of those that contribute much to Chinese Hip Hop for sure.

5) Do you see yourself as an ambassador of the Chinese Muslim identity?

I can’t see myself as an ambassador to any group or community, only to those like minded and with the same beliefs, and mostly a message delivery boy who delivers messages! The word ambassador is too political for me. I do not [mess] with politics. May Allah please forgive my language.

5) Thank you.
Thank you brother, I hope the information helped.

← Feasts of the Sacrifice: Ritual Slaughter in Late Imperial and 20th-Century China