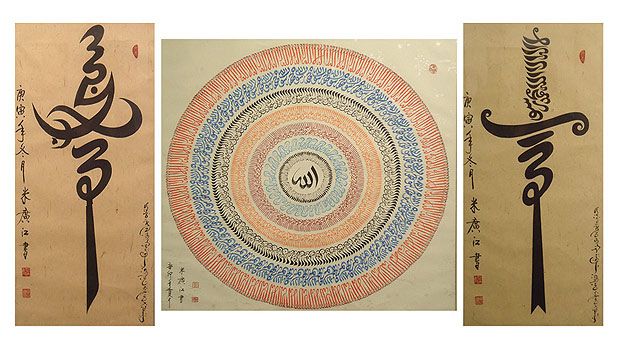 Books by Liu Zhi in Chinese

Here are three texts by Liu Zhi, who is considered one of the greatest Muslim scholars of the Han Kitab era.

Here is an explanation of the titles of these books by my friend Linfan Zhu. 天方(Tian Fang). “The literal meaning of Tian Fang is somewhere that only has one direction. In the History of Ming Dynasty, it says, In the western direction of China, far away from Persia, there is a city called Tian Fang, or called Heaven, or called Mecca. In Chinese, Tian Fang (天方 or 天房) refers to Kaaba in Mecca. Thus, if we say Tian Fang, it deeply and meaningfully refers to Islam.
3`典礼(Dian Li). This is the hardest one in these names. Dian Li in current Chinese it exactly means what you said “ceremony”. But in the past, it has different meaning. As much as I can see, Dian Li should be two words and two different meanings. Dian means books and principles or laws; Li means rites and principles or orders. Confucious has a book named “The Book of Rites”, so I think it is a good way to use “rites”. For this reason, I think if we use Islamic Principles and Rites, that may be better, but not the best.”

Note: These texts written in Classical Chinese by scholars who were well versed in Confucian and Taoist philosophy as well as classical Islamic learning and may be thus too dense for most people to read, and are especially not meant for people who are beginners in this field or are not familiar with classical Chinese Philosophy or with Islam as these texts would be too dense for them.

Acknowledgement: I would like to especially thank brother Linfan Zhu for providing these texts.

← Books by Wang Daiyu in Chinese
Feasts of the Sacrifice: Ritual Slaughter in Late Imperial and 20th-Century China →